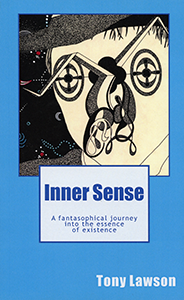 A fantasophical journey
into the essence
of existence.

“Daniel Davis is a bored and disillusioned bank clerk whose humdrum existence is unexpectedly put to the test one morning by the appearance of The Black: an impenetrable wall of darkness which incarcerates him unremittingly within the confines of his own home. Totally cut off from the outside world, Daniel has to reorganize and reassess his daily life in order to retain some control over his vacillating mind. When a chance to escape finally arrives, Daniel finds himself, perhaps unsurprisingly, teetering between the frying pan and the fire. Aware that he has no real choice, he starts out on an intrepid journey in which past and present, fact and fiction, fear and fascination interweave in a kaleidoscopic world whose enigmatic inhabitants goad him into a seemingly impossible quest to find his inner sense.”