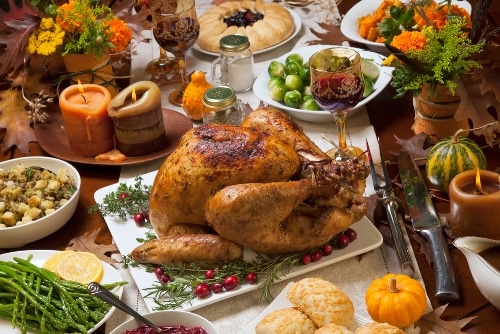 We seem to be all over the place in our anxieties about food. One minute we are in a panic over obesity; the next, over super-skinny models. But why be surprised? Some of us are so confused about eating that we are not even sure what our meal times are called.

What, for example, is the name of the evening meal? Is it dinner, supper or tea? And if the answer is dinner, why are our children having school dinners in the middle of the day?

Or, to put it another way, if someone invites you to tea, what time do you arrive? And what, if anything, do you expect to eat? Some thinly-cut cucumber sandwiches and a piece of cake or a full-on hot dinner with dessert?

“It’s very complicated, really,” says Colin Spencer, author of ‘British Food: An Extraordinary Thousand Years of History’, referring to meal-time terminology. “It always conveys some social distinction. Food is so symbolic of where you believe you are within society.”

Nearly everyone agrees that breakfast is the first meal of the day. The confusion sets in after elevenses or mid-morning coffee and biscuits.

In the evening, the lower classes and northerners come home from work, school or shopping and sit down to another fairly substantial meal called tea at about 6pm. However, the upper classes and southerners eat later and the meal they eat, called dinner, tends to be the main meal of the day.

For all classes and regions, supper usually means a late-night snack or meal, but some people use the term for the early evening meal if they have already had their dinner at midday. Afternoon tea – a pot of tea with sandwiches and cake once enjoyed by upper-class ladies of leisure – has largely died out but lives on in the form of the 4pm tea and biscuits that people of all classes enjoy.

If the system were not complicated enough, schools introduce even more quirks. By custom, at least in the state sector, all schools serve school dinners at midday and call the evening meal tea; so to avoid confusing the children, some parents temporarily adopt the breakfast–dinner–tea terminology even if it goes against their instincts. Another anomaly is that if your children eat the meal the school provides, it is a school dinner, but if they take in their own food, it is a packed lunch.

Not surprisingly, research on meal terminology is a bit thin on the ground but last year, Geest, the fresh food supplier now owned by Iceland’s Bakkavör, did a survey that provided some insights.

How did the divergence come about? In medieval England, everyone knew you ate breakfast when you rose at daybreak, dinner in the middle of the day and supper just before you went to bed, around sundown.

Things started to change with rising prosperity, urbanisation and industrialisation. The better-off could afford candles and lamps that allowed them to party after dark, and keeping late hours became a status symbol. For these people, dinner – still the main meal of the day – was gradually pushed back until it reached evening.

As writer Sherrie McMillan explained in an article in History Magazine, this posed a problem for early risers such as mothers with children: they faced an enormous gap between breakfast and dinner. So the womenfolk invented a light, midday meal called luncheon to bridge the gap, using a word with a disputed derivation.

Meanwhile, among the lower classes, working people now had to travel to factories to work so their midday meal, still called dinner, consisted of only what they could carry with them. Hungry again by the end of the day, they would have another substantial meal when they arrived home, calling it tea after the drink that accompanied it. Supper remained, for all classes, a bed-time snack.

Could we conceivably rationalise the names of our meals? Perhaps we could agree that dinner is, as it always was, the main meal of the day, usually consisting of more than one course. If eaten at midday, the terminology should be breakfast–dinner–supper, as in medieval times. If eaten in the evening, the terminology should be breakfast–lunch–dinner, on the basis that breakfast–tea–dinner makes no sense at all and to call tea a meal is confusing.

Good. Now, having solved that problem, all we have to agree on is what to call the dish that comes after the main course. Is it pudding, sweet or dessert? Or should it be simply afters?